My friend Dave and I got together yesterday and had a little Horus Heresy game at Titan Games in Timmonium, MD. It was nice to finally get the little dudes on the table and throw some dice around with an old pal. Titan is a clean and well-stocked shop with friendly, non-creepy staff. Check it out if you are ever in the area. I'm pretty sure Dave is also going to put some photos of our game on his blog too, so have a look.

Dave and I wanted to have a small game, since we both are still working on our Pre-Heresy armies. We opted to play Killsone Survival. This is a fan-produced ruleset that lets you play small games with each model acting independently -- Necromunda style. You build your army by grabbing individual models from your army codex with certain restrictions. There are also a bunch of nifty upgrades and wargear you can buy. Turn initiative is random like the Lord of The Rings miniatures game. We played an 400-point game on a 4x4 foot table. I used my Alpha legeion and Dave used his beautiful Death Guard. Note how much cleaner the Death Guard are than the Alpha Legionaries! Dave claims his Death Guard are loyalists so I guess that makes The Alpha Legion traitors, for this week anyway.

The killzone rules allow you to use a Dreadnaught but a Mortis Contemptor with two Kheres Assault Cannons seemed ridiculous in a 400 point game. I opted to bring my Javelin Land Speeder instead. I upgraded to a Multi-Melta because I figured it might have to take down Dave's Contemptor.

I suspect Dave noticed I wasn't taking my Contemptor and, being a gentlemen, opted not to take his. He did however, use his recently unearthed old-school Rapier Laser Destroyer to counteract my Javelin.

We rolled the Capture and Control mission, where the objective is to capture a 12" circle in the center of the board. All models entered from reserves on random board edges. This promised to be chaotic! The secondary mission was Reverse Engineering, in which you pick and enemy with a special or heavy weapon and kill him in assault so you can steal his gun for future study. The tertiary mission was Vain Glory Hound, where you pick a model and he has to get the most kills for your side. There were also three tokens on the board with bonus objectives or traps under them.

Turn 1:
Dave went first and did well on his reserve rolls allowing him to deploy most of his army on his side of the board. His Rapier and a couple marines ended up in an alley on my left flank and he placed a bunch of Marines and Breachers on my right. Here you can see a group of his Marines who have joined up and are advancing down the right flank, looking for heads to kick in. 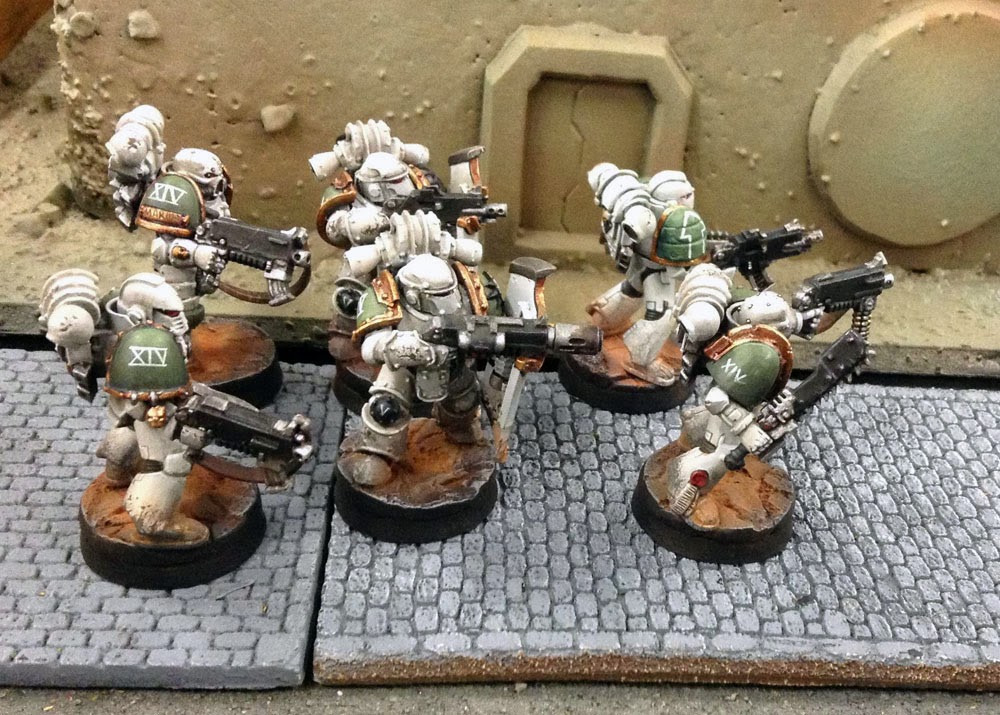 I rolled terribly for reserves and only got a few marines on the board. My Javelin did make it on though, which makes sense since it is all fast 'n' stuff. The Javelin park between two ruined buildings in the center of my line. 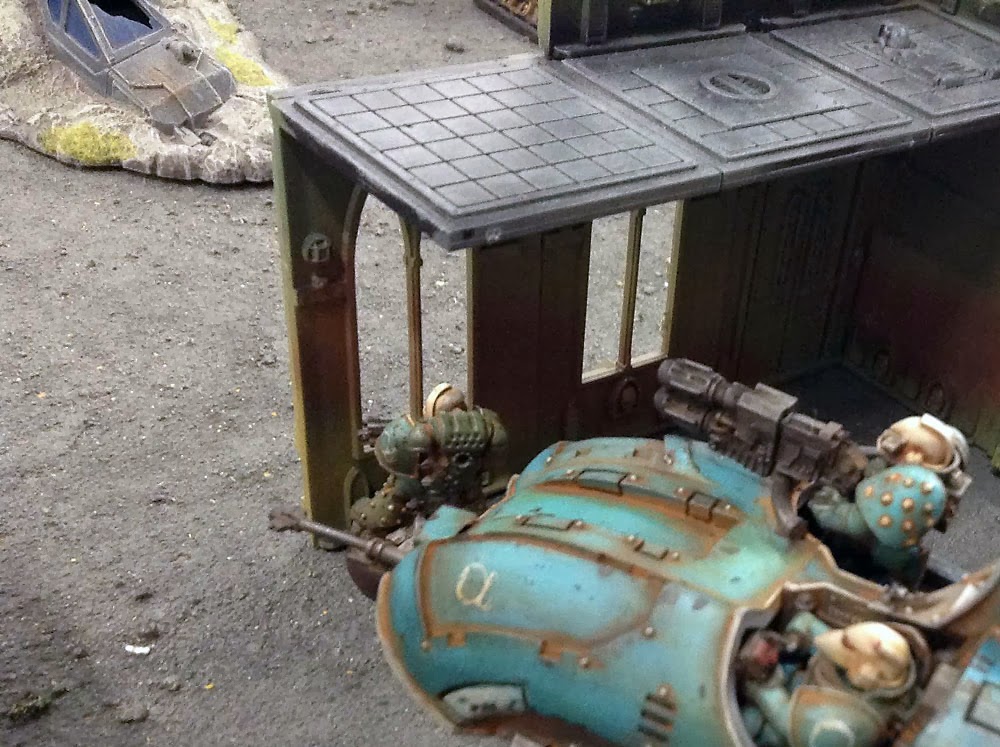 I also had a couple guys drop in on the my right flank, right around the corner from Dave's big blob of Marines. I hoped some friends would show up to help them next turn! 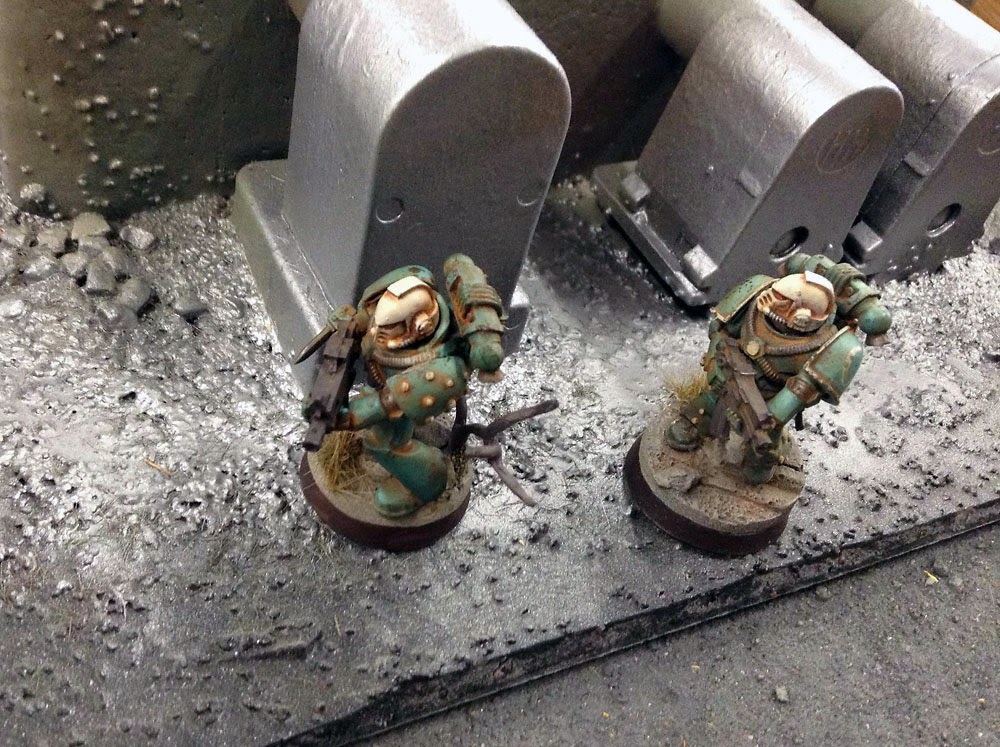 My Marines took a few pot shots at the Death Guard and took one down. Modeling the scopes on their bolters must have been worth it! The Javelin Fired it's Twin Linked Cyclone Launchers at the Rapier but whiffed. Double twos followed by double twos!

Turn 2:
Dave rolled to bring everyone else but one Marine on the board. On the left side of the board, his rapier advanced to get a better field of fire and find some nice hard cover. Two big, scary Terminators also arrived to the party. The rapier couldn't fire because it had moved, (phew!) while all the Marines and Termies who had shots opened up with their bolters to no effect. 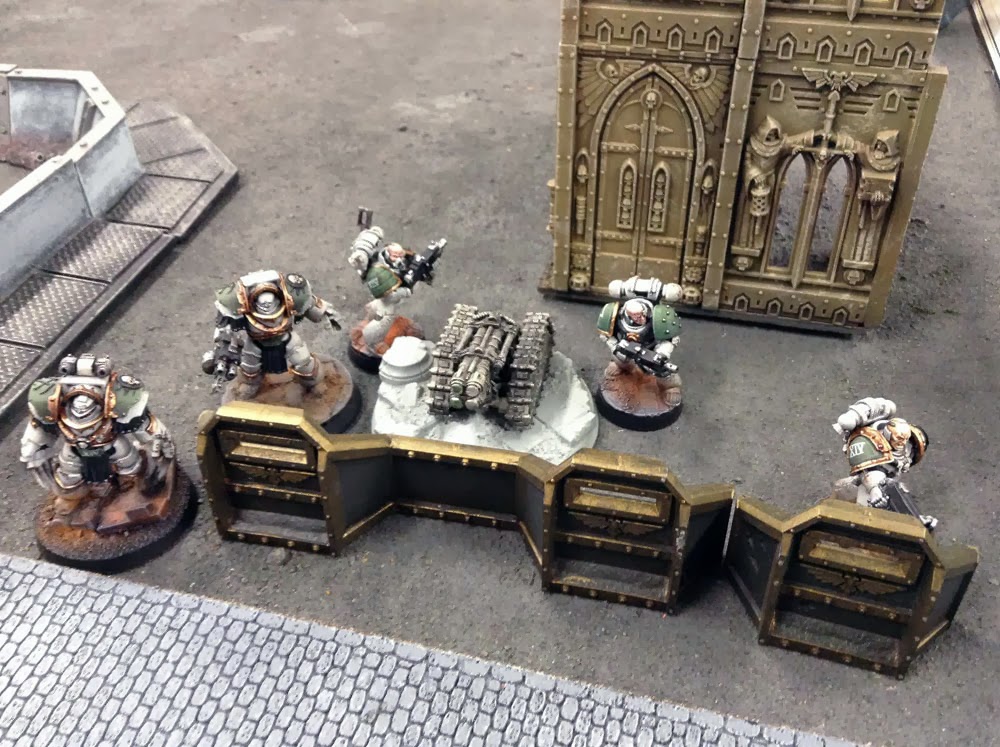 Thankfully, my reserve rolls went better this time and all of my army but my Group Leader and a couple marines arrived. On the left flank, one of my Terminators, a Marine and my Missile Launcher showed up. Missile Launcher dude put a Krak Missle into the Rapier and took a Wound off of it. Booyeah! 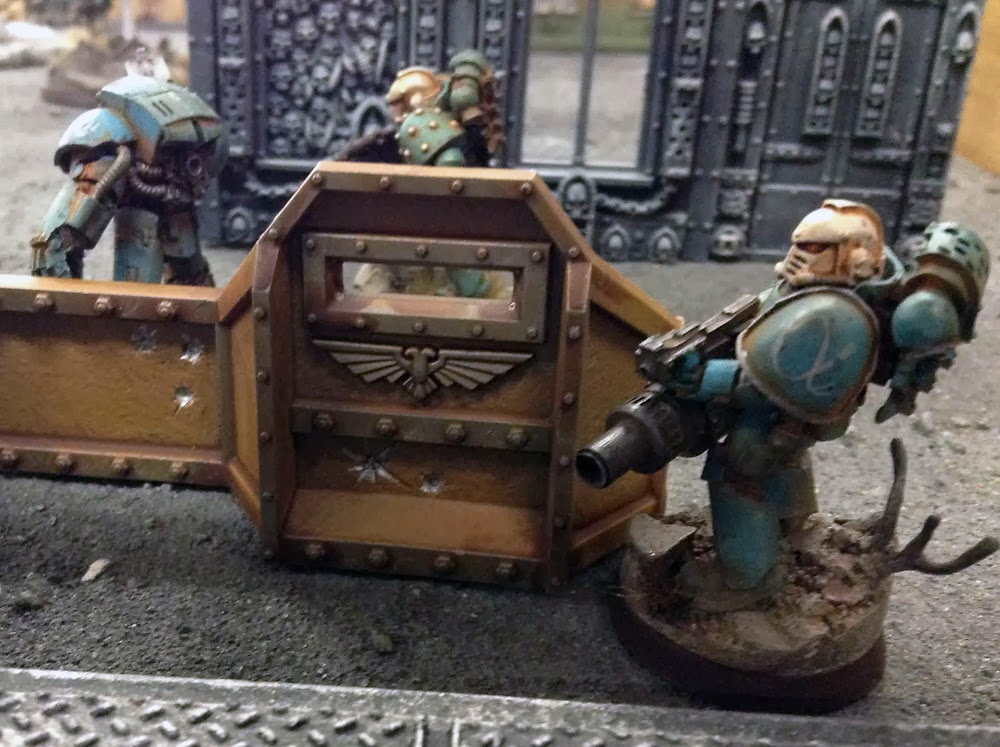 Several Marines also showed up on my right flank to help out. In typical Alpha Legion style, one of my Marines also arrived behind enemy lines for a sneak attack! Bolters opened up and I think I took down another Death Guard Marine. 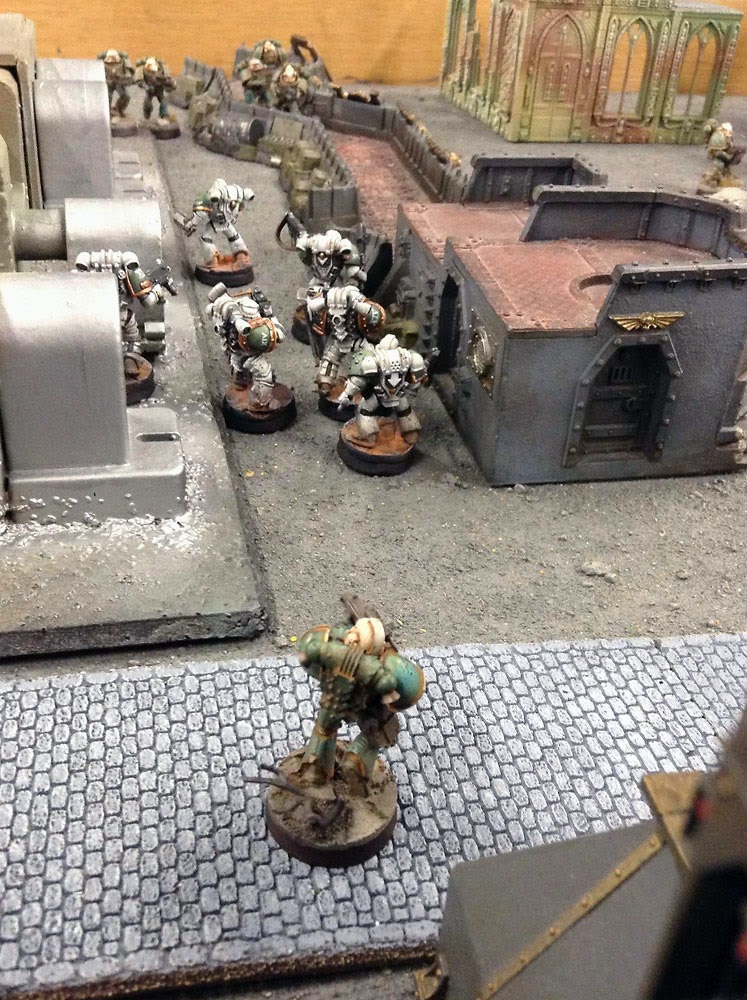 My Javelin advanced to within Multi-Melta range and opened up with all it had on the Rapier. Dave had positioned the Rapier well though, and it made all of its cover saves provided by the barricade. Drat! 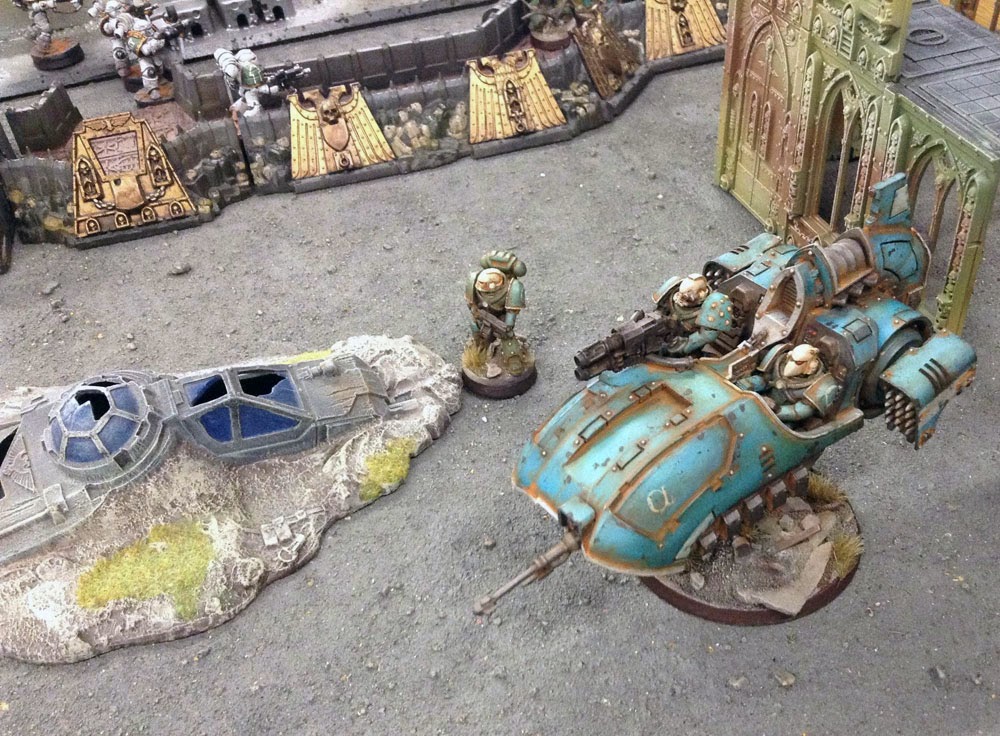 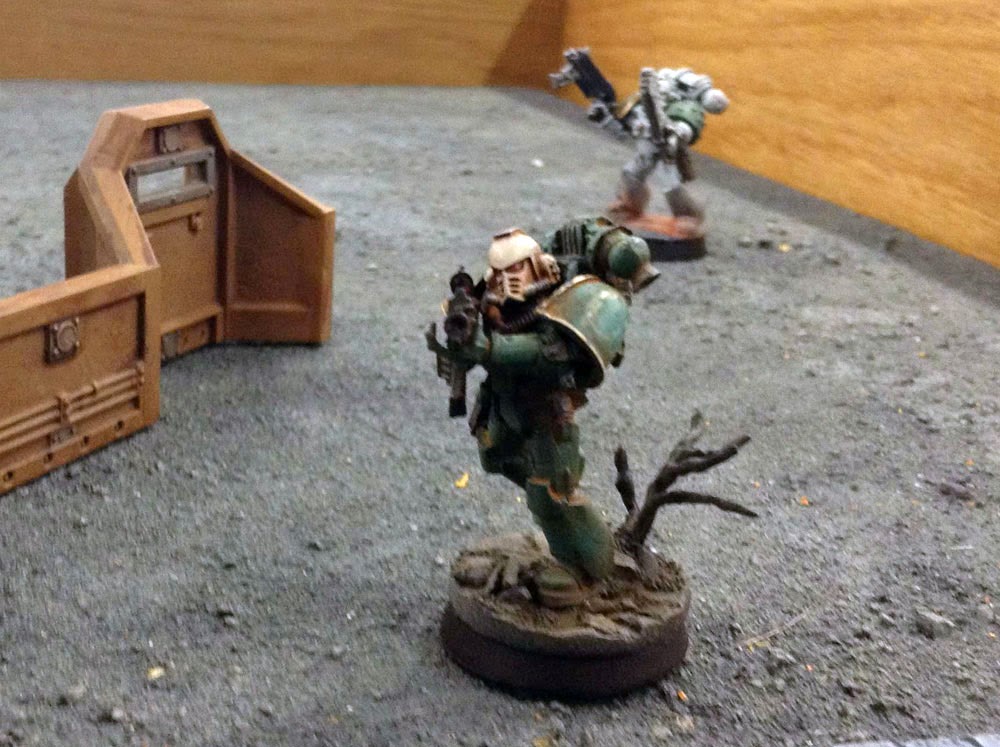 Dave advanced his Marines down my right flank and opened up with bolter fire doing... nothing. 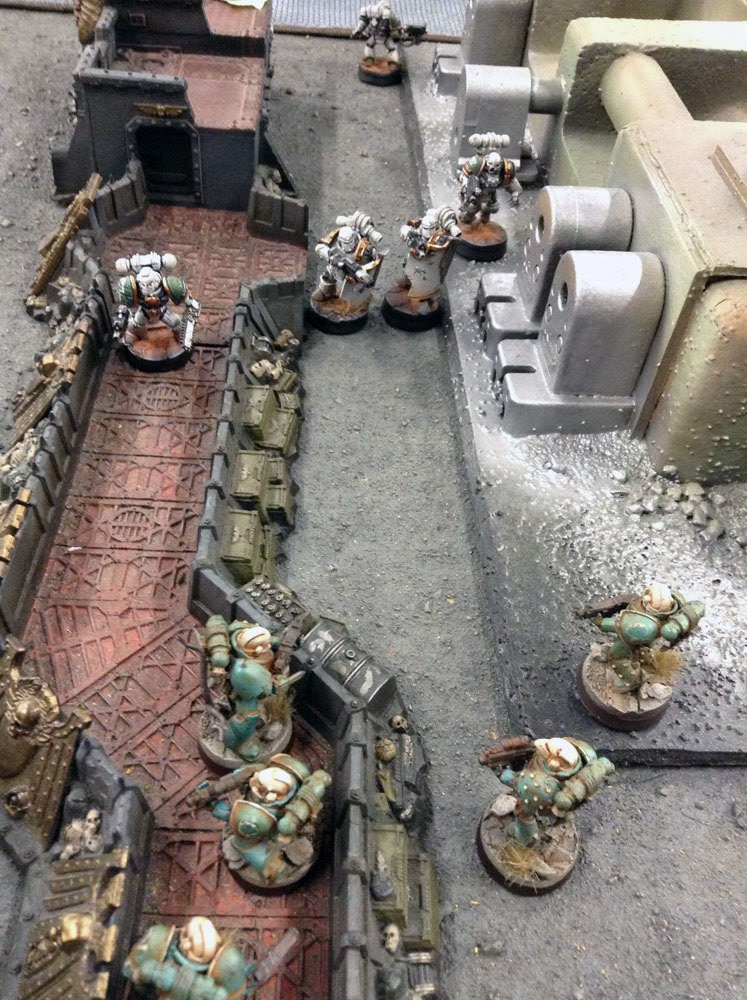 His Breacher armed with a Melta Gun hit and then rolled a one to wound! 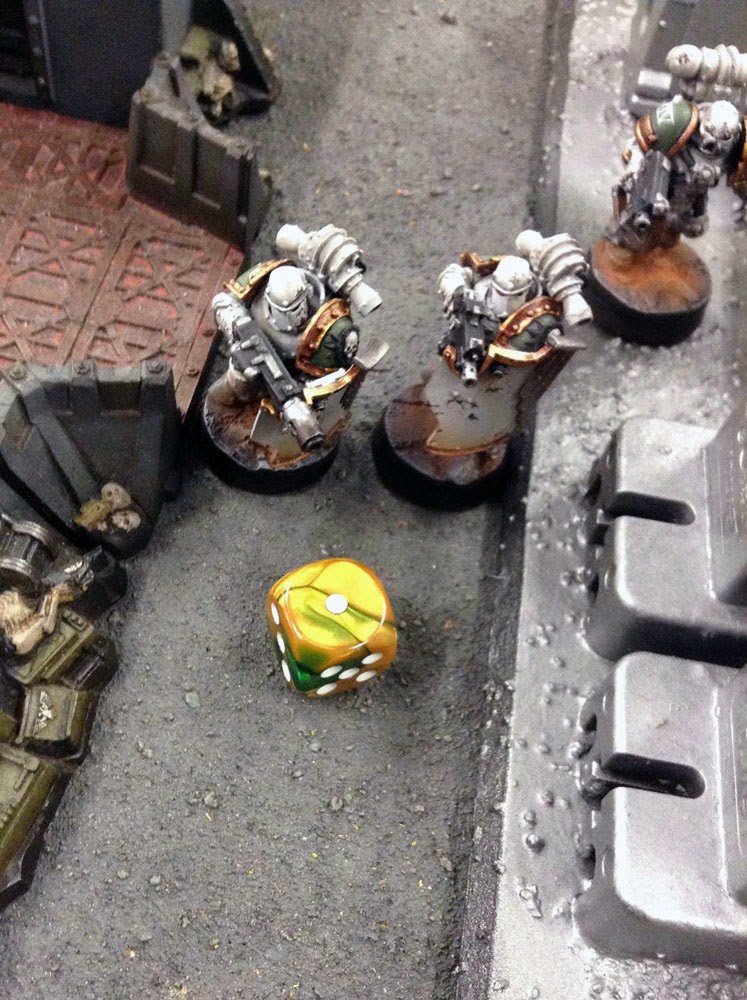 Things didn't go much better on the other side of the board for the chosen of Mortarian. The Rapier scored a penetrating hit on my Javelin but I made a successful jink roll! I don't know how you dodge a freakin' laser but I'm not complaining. Turn three: still no kills for the Death Guard. 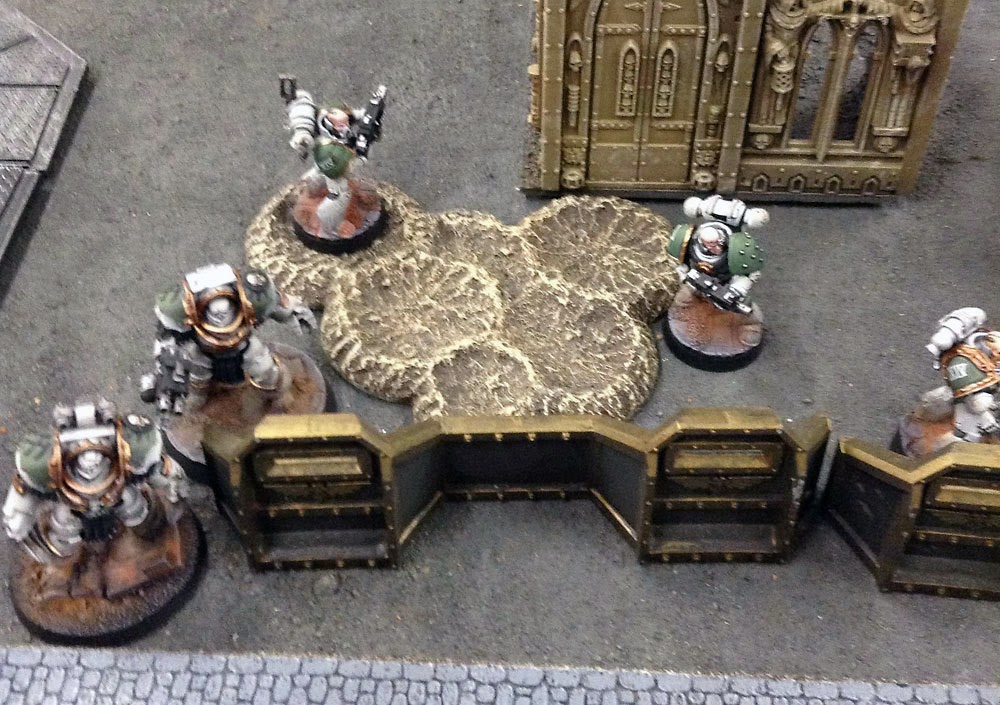 Turn 4:
Dave won the initiative roll again and the Deathguard surged forward assaulting where they could. The Cataphracii with Lighning Claws plowed into my Marine with the Missile Launcher and dispatched him with ease.  The other Cataphracii  charged into a Terminator and a Marine, killing them both. An alpha marine also fell to bolter fire. First blood for the Death guard and the Alpha Legion left flank was shattered! 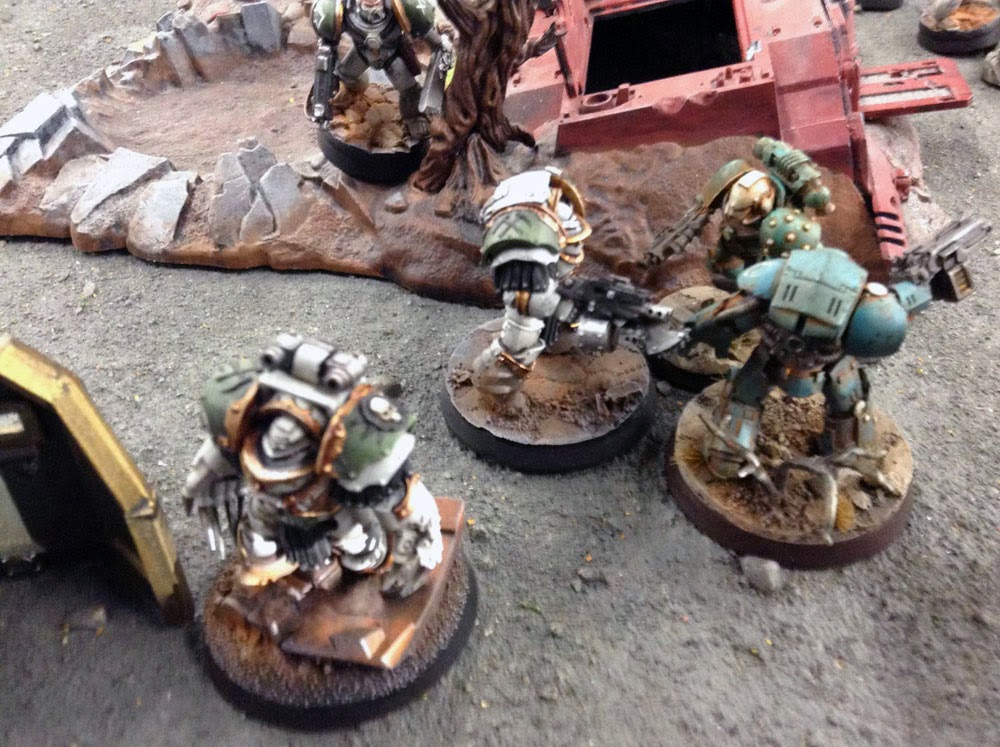 Things didn't go so well for the Death Guard on the other side of the battlefield. Dave charged one of my Marines with his Sergeant armed with a Powerfist, but two more of my marines counter-charged in to assist (you can do that in killzone.) Only one of my Marines scored a wound but guess what Sarge rolled for his Artificer armor save? Good night, Sarge. 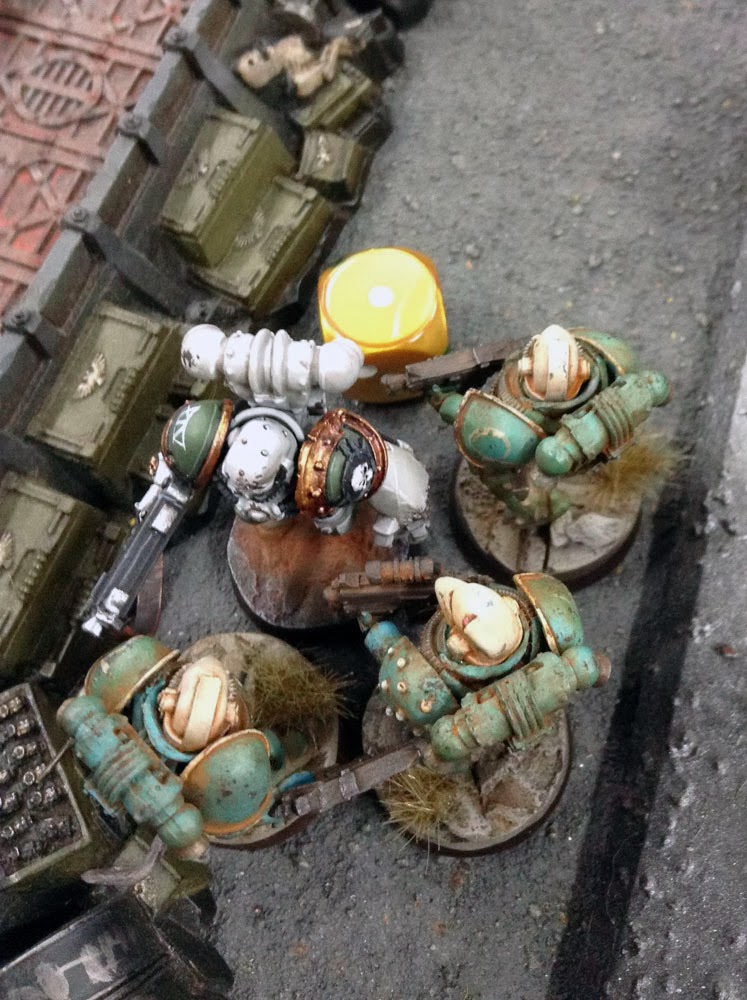 In the Alpha Legion turn I retreated my Javelin to the other side of the board to get it away from the Cataphracii with a power fist. I opened up with all I had and the Javelin took down the Cataphracii with Lightning Claws. Did I mention that in Killzone, A model gets to roll for both its armor save and its invulnerable save? This makes Cataphracci pretty darn indestructible.

Turn 4:Death Guard take the initiative again. Having wiped out my left flank, Dave's remaining Cataphracii and four Marines move toward the objective in the center while hammering the Alpha Legionaires with Bolter rounds to little effect. 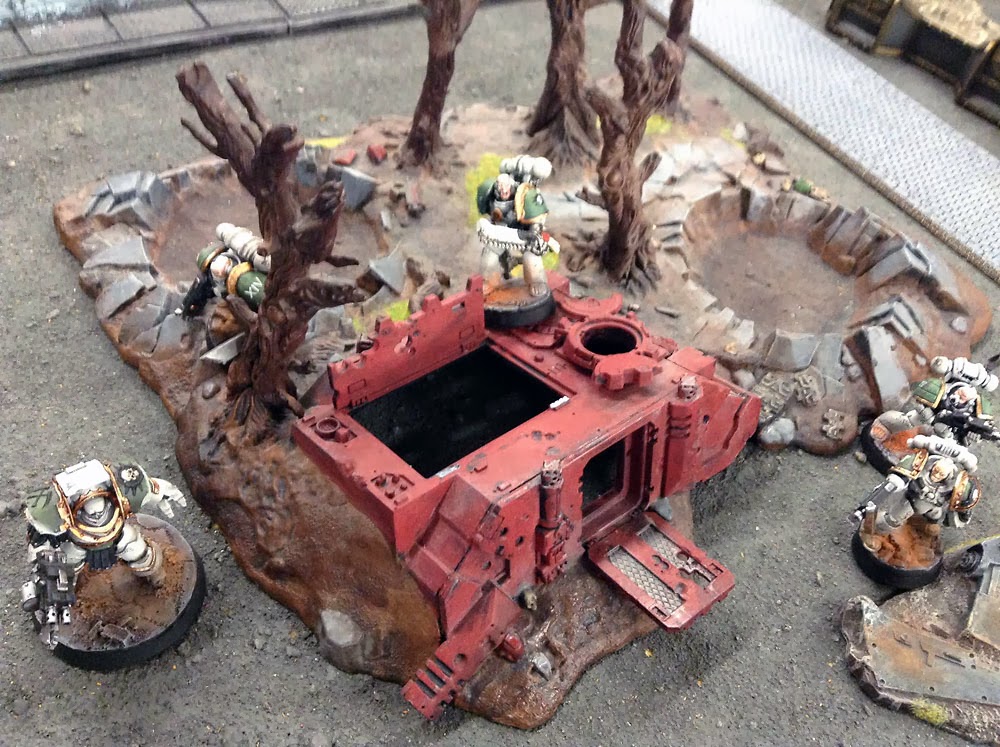 Over on the right flank the remaining Death Guard get stuck in to close combat with no casualites on either side. 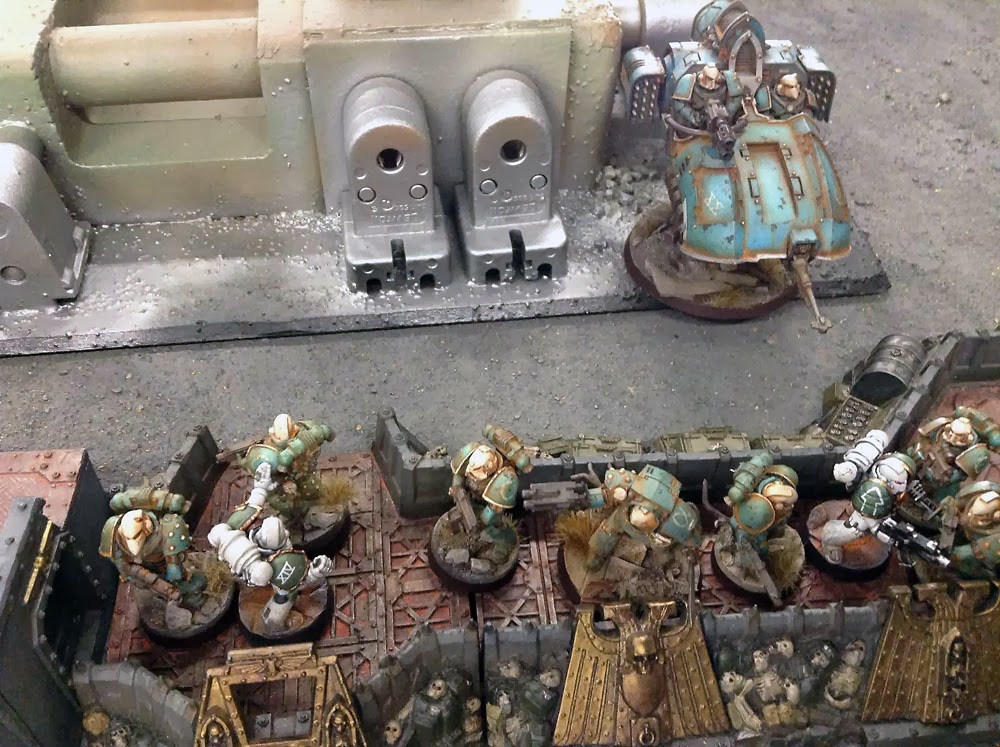 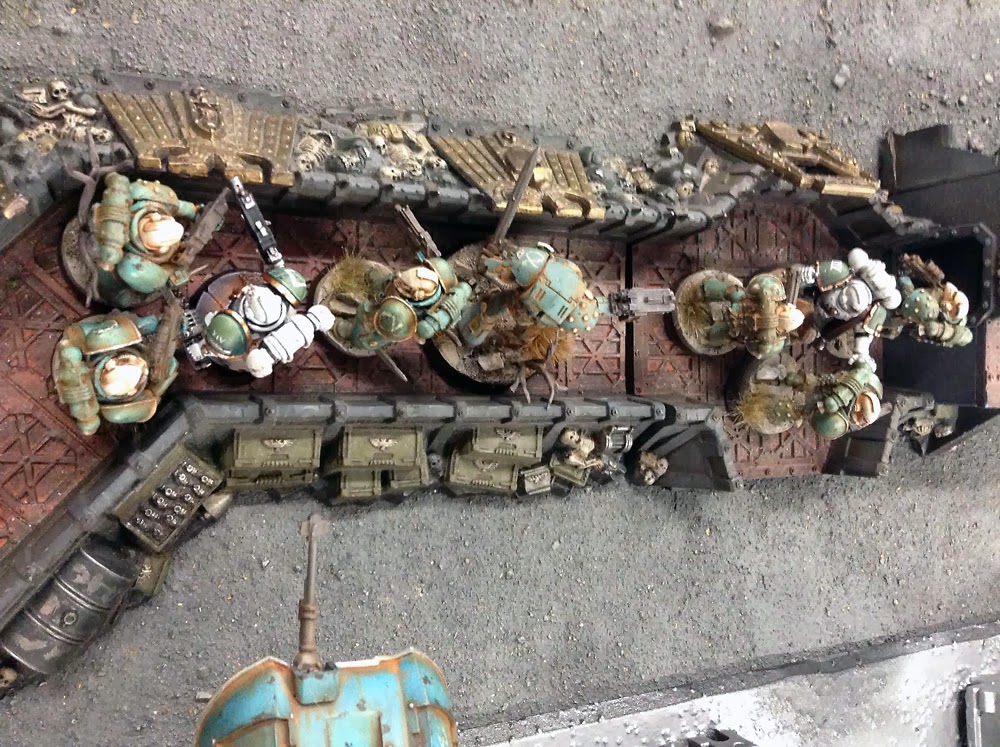 Turn 5The Death Guard on the left continued to advace toward the objective while pouring fire on the Alpha Legion. The sneeky outflanker also managed to get a side shot in on the Javelin but he didn't roll the six needed to penetrate. 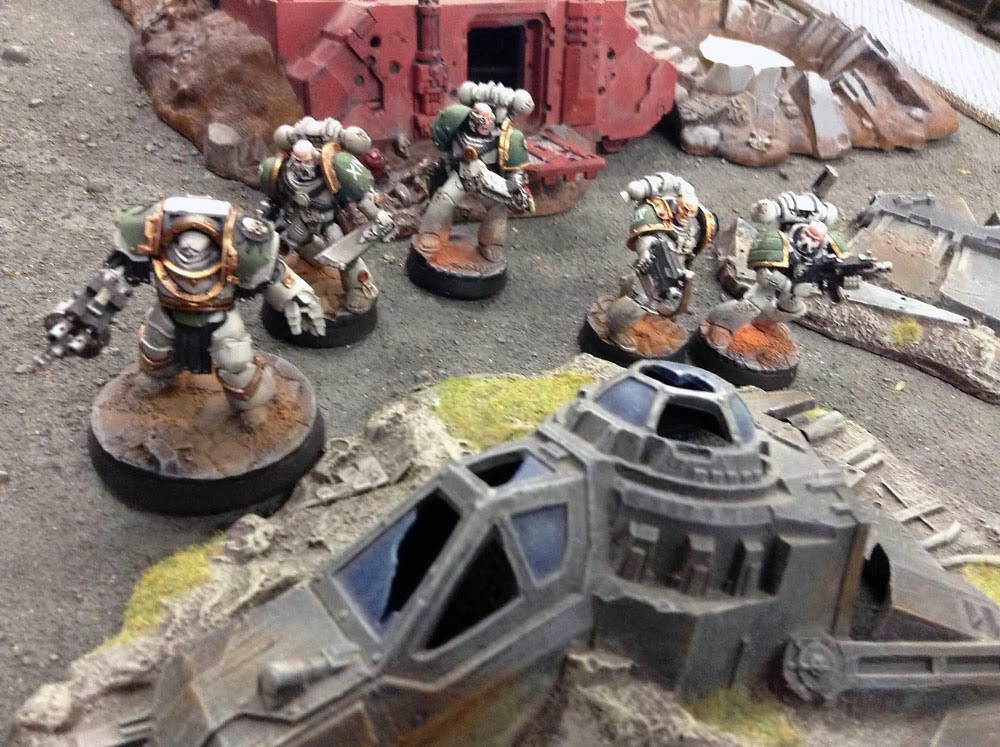 The Javelin, noticing the shells bounching off its armor advanced and came about to lay Mr. Sneaky Marine to waste. My Terminator Sergeant also took out one of the advancing Marines with his storm bolter. The Last two Death Guard on the right side of the board finally fell in close combat. 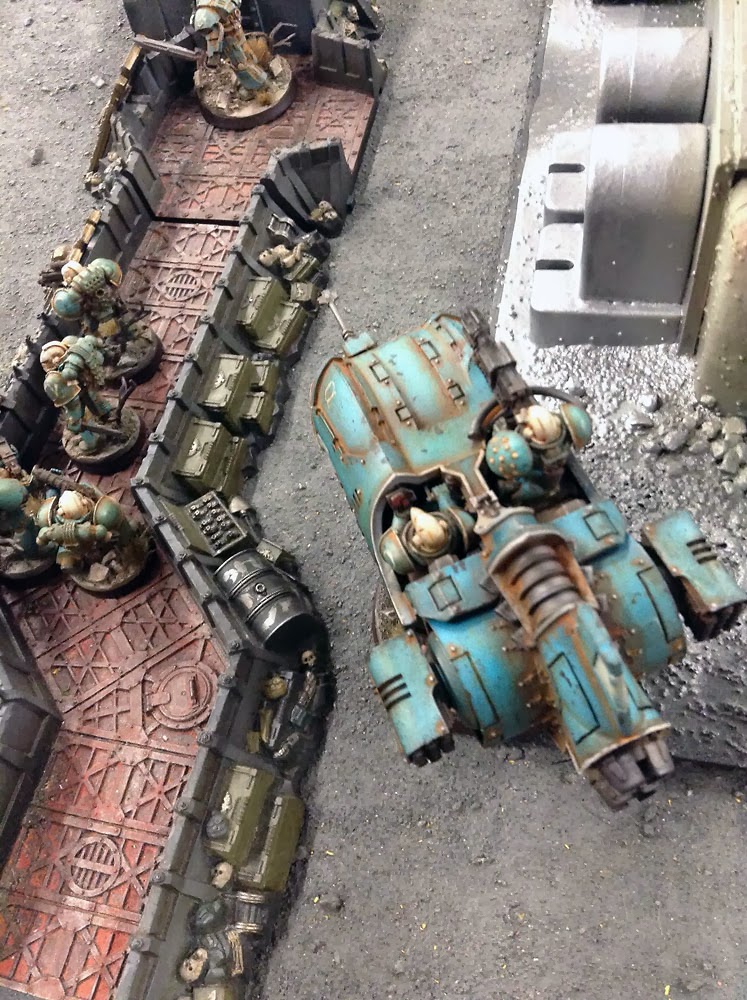 Turn 6
Dave won the initiative once again and planted his remaining five models in the objective zone. They all opened fire but don'e manage to kill anyone. 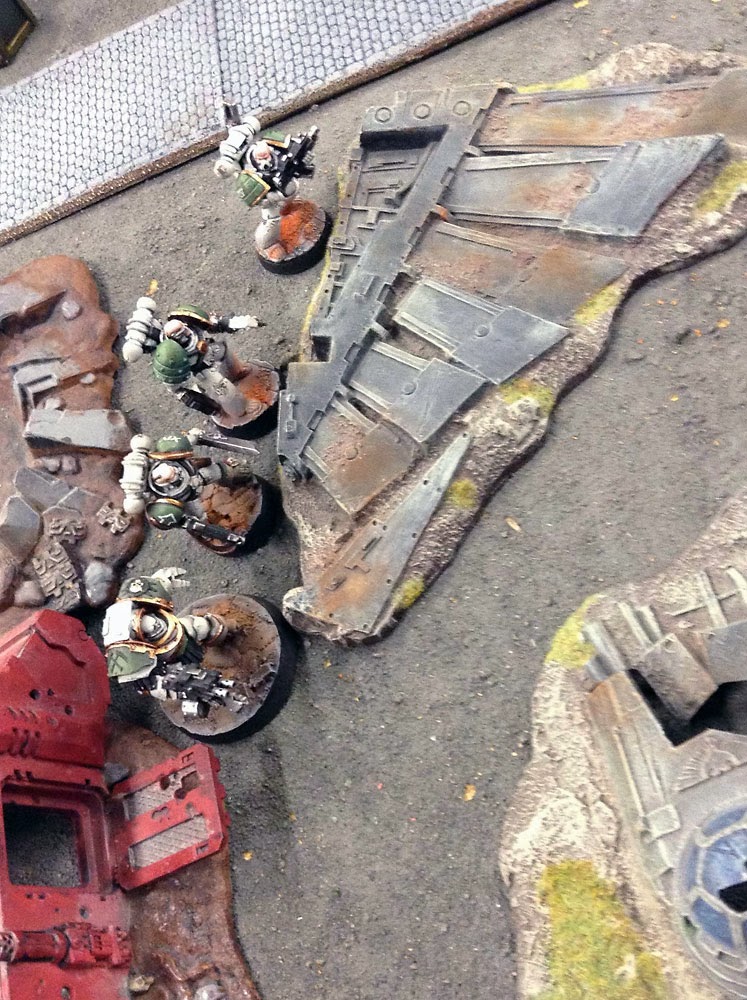 I left one of my Marines to claim a secondary objective marker and advanced everyone else into the primary objective zone. I opened up with everything I had had killed the three remaining Death Guard in power armor but not the Terminator, who happened to have a medkit, giving him a 2+, 3+ and 5+ save to roll for every shot.

Deathguard Score:
3 Points for partial completion of Primary objective - getting all models into the objecives zone.

Alpha Legion
3 Points for capturing a Secondary Objective token.
1 Point for completing Tertiary Objective - Javelin got the most kills.

Gah. As usual, I needed to pay more attention to the objectives. I should have grabbed that secondary objecive token a turn earlier so I could have moved all my troops into the objective zone on the last turn. I also should have taken care not to shoot the Breacher with the Melta Gun, as killing him in Assault was my secondary objective. As usual I got too caught up in just killing stuff. Next time you will pay Dave Taylor, next time!
Posted by Marc Raley at 1:08 PM